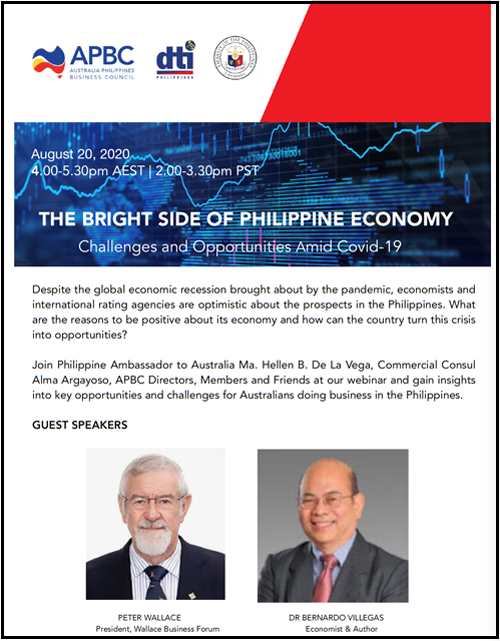 CANBERRA, Australia (24 August 2020) – In a webinar hosted by the Australia Philippines Business Council on 20 August, economist and author Dr. Bernardo Villegas discussed the strong fundamentals of the Philippine economy and the long-term opportunities that business should seize in the Philippines to stage an economic recovery.

Business consultant Mr. Peter Wallace referred to CEO Magazine that ranked the Philippines as the 7th best country to invest in or do business with in 2020, in a report published on 29 April. He also said that as the world is moving astronomically in terms of IT, business should look at the Philippines given the great ability of Filipinos in this field. Wallace also commended the government because the “infrastructure needs are being addressed” and for working on tax reforms in particular reducing corporate income tax.

Philippine Ambassador to Australia H.E. Ma. Hellen B. De La Vega promoted investment opportunities in IT-BPM services; manufacturing of automotive parts, electronics and shipbuilding; agribusiness; traditional and renewable energy; infrastructure and medical products and supplies. The Ambassador said, “This administration is committed to build a healthier and more resilient Philippines in the years to come. Now is the time to partner with the Philippines.” The Ambassador also invited business to the Philippines’ innovation and industrial corridor New Clark City.

The event was organized in cooperation with the Philippine Trade and Investment Centre-Sydney. --- END