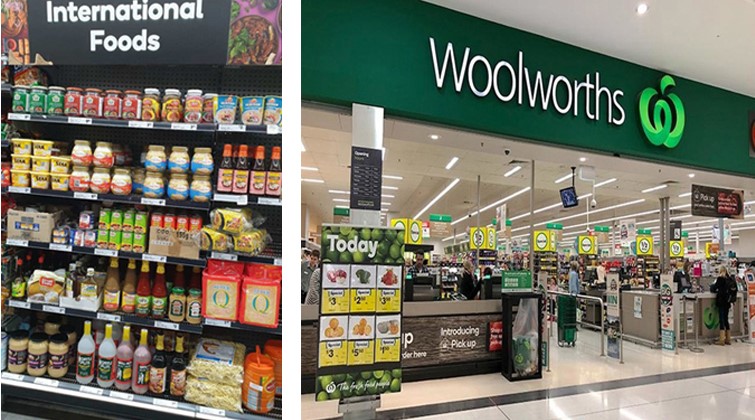 In photos: Filipino product range in Woolworths supermarket in Sydney

25 February 2021 (Canberra) – The Department of Trade and Industry through the Philippine Trade and Investment Centre (PTIC) in Sydney said Filipino products are now available in more mainstream retail stores in Australia.

From Filipino sauces and mixes to vinegar, soy sauce, salty snacks, biscuits, rice noodles and other Filipino favourites, giant retailer Woolworths is ramping up the number of store locations where Filipino products can be found in its international food section in response to a growing multicultural population and increasingly adventurous Australian mainstream consumers.

Philippine Ambassador to Australia Ma. Hellen B. De La Vega underscored the global appeal of Filipino food and the role of cuisine in bringing two cultures together. The Ambassador said, “Filipinos and Australians both love our barbecue and I am very pleased that through Woolworths, we are able to supply the rich and distinct Filipino flavors to the Australian table.”

From only a dozen stores in 2019, the distribution has now expanded to 60 stores across Australia, with more stores to be added within the next 3-5 years as more Filipinos and Australians seek out Filipino products to enjoy.

Alma Argayoso, the Philippines’ trade representative to Australia said DTI aims to grow the market and make Filipino products more available not only to Filipinos but also to Australian buyers.

“The Filipino mom-and-pop shops will remain as they have unique offerings, style and culture catering to the Filipino community, but if we are aiming to target the majority of Australians, we have to be in the mainstream stores,” Argayoso added.

The demand for Filipino products increased during the pandemic when lockdown measures were imposed as stuck-at-home Filipino-Australians have turned into cooking more adventurous dishes and trying out new recipes, according to DHN Import/Export Trading, the company that has pioneered stocking Filipino staple pantry goods in Woolworths.

“We predict that the demand for Filipino products will continue to increase even beyond the pandemic. There is an increasing awareness now about Filipino cuisine and the availability of products and ingredients in the mainstream supermarkets will further drive demand,” Bob Harris, the marketing consultant for DHN Trading, said in a recent interview.

“Making the products available in mainstream shelves also offer unique opportunities and practical convenience for Filipino families where both adults work and for shift workers as Woolworths stores are open 7 days a week from 7 am to 10 pm or 12 midnight depending on the area,” Harris added.

Aside from traditional Filipino favourites, other Philippine-made products, either branded or toll-packed in the Philippines such as canned tropical fruit, fruit juices, banana chips, virgin coconut oil, coconut water, coconut flour and other coconut products are also available in the mainstream aisles of Woolworths. These products are more widely distributed in over 900 Woolworths stores across Australia. -- END