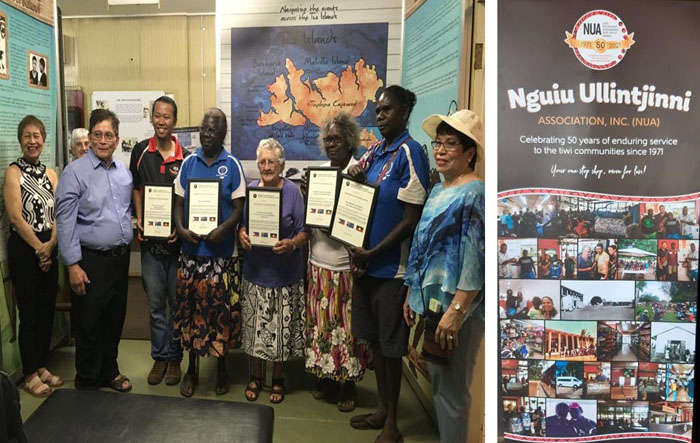 PHCG Rivas toured the Patakijiyali Museum established in the early 2000s by Sr. Anne Gardiner to preserve Tiwi history, language and culture. Sr. Anne is the author of the Commemorative Book on the 100 Years of Missionary Work in Bathurst Island, which mentions the early Filipino settlement in the island through anecdotes of indigenous people.

A wreath of flowers and prayers were offered at the memorial site of the ill-fated steamships, SS Don Isidro and SS Florence D, located at the entrance of the Patakijiyali Museum. The SS Don Isidro and SS Florence D sank in Darwin Sea during the bombing of Darwin by Japanese fighter planes on 19 February 1942. Fourteen (14) Filipino merchant mariners perished during the attack. They are presently honoured on a plaque at the Darwin Military Museum, as well as in a Roll of Honour provided by the Northern Territory Library Service.

The visit is part of the celebration of the 75th Anniversary of Philippine-Australian diplomatic relations and demonstrates the long-standing and enduring cultural and people-to-people links between the Philippines and Australia. END