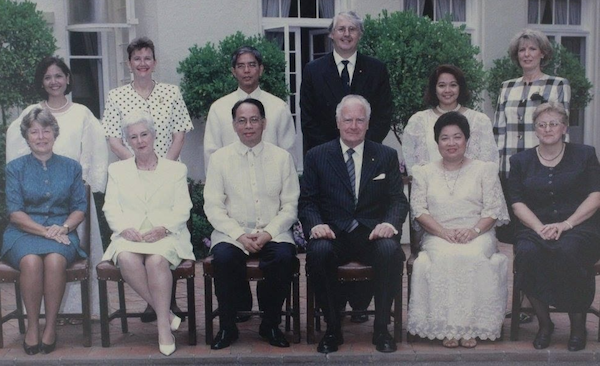 Ambassador Willy C. Gaa served as the Philippine Ambassador to Australia and non-resident Ambassador to Vanuatu, Nauru and Tuvalu from January 2002 to November 2003.

Ambassador Gaa began his diplomatic career in 1974 which would then span 36 years of service to his country.

In addition to serving as Philippine Ambassador to Australia, he served as Ambassador to the United States of America (2006-2011), the People’s Republic of China (2003-2006), and Libya with concurrent jurisdiction over Tunisia, Malta and Niger (1992-1997). As Philippine Ambassador to the United States of America, he was influential in the passage of the World War II Filipino Veterans Equity Compensation Fund signed in 2009 and the funding of the Philippines Compact program by the Millennium Challenge Corporation in 2010.

Ambassador Gaa represented the Philippines in various United Nations conferences, as well as multilateral and regional meetings, seminars and training. He served as Adviser of the Philippine Delegation to the 36th and 53rd United Nations General Assemblies (1981 and 1998, respectively).

He was Head of the Philippine Delegation to the Working Group on the Southeast Asia Nuclear Weapon Free Zone (SEANFWZ) and Zone of Peace, Freedom and Neutrality (ZOPFAN) and Senior Officials Working Group on the Regional Code of Conduct on the South China Sea in Singapore, Bangkok, Thailand, China, Vietnam and Brunei Darussalam (1999-2000); the Intersessional Group Meetings on Confidence Building Measures of the ASEAN Regional Forum (ARF) in Tokyo, Kuala Lumpur, New Delhi and Singapore (1999-2001); and the Philippine Working Group Meetings on Confidence Building Measures Between China and the Philippines in Beijing (1999) and Manila (2001).

Ambassador Gaa was instrumental in maintaining the momentum of high-level exchanges between the Philippines and Australia. This included the 16th Joint Commission Meeting (JCM) held in Manila on 20 June 2002, the 4th Meeting of the Joint Working Group on Meat, Dairy and Livestock in Cagayan de Oro City on 06 April 2002, the visit of Secretary of Energy Vincent Perez on 16-18 September 2002 at the invitation of the Department of Prime Minister and Cabinet (DPMC), and several visits of defense and military officials, local government officials, and members of the legislative branch.

During his term, then President Gloria Macapagal-Arroyo and then Prime Minister John Howard met at the sidelines of the 10th APEC Economic Leaders’ Meeting in Los Cabos, Mexico on 26-27 October 2002 reaffirming a commitment to cooperate on counterterrorism following the Bali bombing incident. This would lead to the signing of the Memorandum of Understanding on Cooperation to Combat International Terrorism in March 2003 in Canberra. Security cooperation was further solidified with the signing of the Memorandum of Cooperation against Transnational Crime on 14 July 2003 in Manila.

Ambassador Gaa obtained his Bachelor of Arts (A.B. Political Science) degree from Manuel L. Quezon University in 1966. He graduated from the University of the Philippines in 1970 with a Bachelor of Laws degree and from New York University in 1985 with a degree in Master of Laws (International Legal Studies).

He passed the government career service exam in 1968, the Philippine Bar Examination in 1970 and the State Bar of California, U.S.A. in 1990. His previous legal work experience was as tax and compliance attorney at Petrophil Corporation (1974-1975) and as trial attorney at the Office of the Solicitor General (1971-1974).

Ambassador Gaa was presented with the Gawad Sentenaryo (Centennial Award) in 1999 by the National Centennial Commission and the Distinguished Service Award in 2000 by the Department of Foreign Affairs.

Ambassador Gaa passed away on 8 December 2015. He is survived by his wife Erlinda Concepcion and two sons, Wendell and Warren.