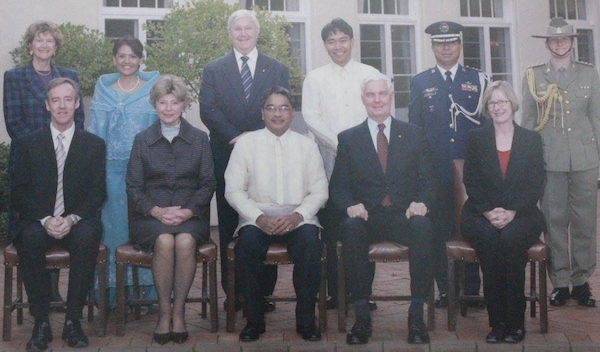 It was during his tenure as Philippine Ambassador to Australia that the Philippines Australia Status of Visiting Forces Agreement (SOVFA) was signed in May 2007. The signing was witnessed by then President Gloria Macapagal-Arroyo and Australian Prime Minister John Howard during then President Macapagal-Arroyo’s State Visit to Australia. It was also during his tenure when the inaugural Bilateral Consultations on Counter-Terrorism was convened in June 2006 in Manila followed by the second meeting in May 2008.

He facilitated the convening of the 2nd Philippines– Australia Ministerial Meeting (PAMM) in 2008 in Manila. He supported a number of high-level exchanges between the two countries including the visits to the Philippines of Australian Attorney General Philip Ruddock MP (2006), Prime Minister John Howard for the East Asia Summit (2007), Senate President Alan Ferguson (2007), and South Australian Deputy Premier and Minister for Industry and Trade Kevin Foley (2008). He likewise supported the visits to Australia of President Macapagal-Arroyo (2007), House Speaker Prospero Nograles and his delegation (2009) and other senior officials from the Philippine Government.

Ambassador De Leon made significant accomplishments in his military career. Among these are his outstanding role in protecting Philippine jurisdictional sovereignty over the Scarborough Shoal and in neutralizing the Abu Sayyaf Group terrorist leader Abu Sabaya. As the Deputy Chief of Staff for Plans of the Armed Forces of the Philippines, he crafted and signed the RP-US Mutual Logistics Support Agreement, and crafted the AFP Military Strategy of 2002.

He finished his General Staff and Higher Joint Services Courses at the Ecole de Guerre (Joint Services War College) in Paris, France and Project Management Course with the Department of Defence of Australia.