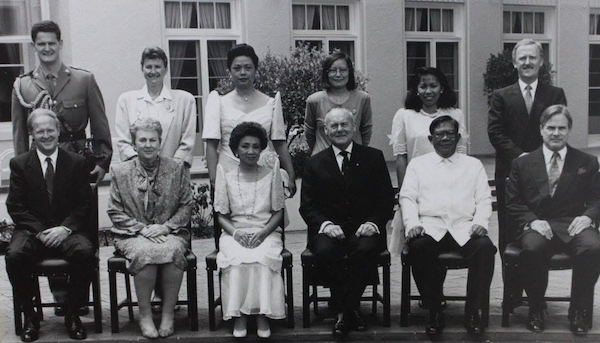 Ambassador Delia Domingo Albert was the Philippine Ambassador to Australia and non-resident Ambassador to Vanuatu, Nauru and Tuvalu from October 1994 to January 2002. In 2003, she became the first female Secretary of Foreign Affairs of the Philippines following a 36-year career in diplomacy. She was also the first woman career diplomat to become a Foreign Minister in ASEAN and the rest of Asia.

She began her career in the Department of Foreign Affairs in 1967. She served in various capacities at the Department including as Director-General of the ASEAN National Secretariat of the Philippines (1990-1994), Secretary-General of the Conference Secretariat of the 4th APEC Economic Leaders Meeting (1996), and as Undersecretary for International Economic Relations and Philippine Senior Official for the Asia-Pacific Economic Cooperation (2002).

It was during her tenure as Philippine Ambassador to Australia when then President Fidel V. Ramos undertook the first Philippine Presidential Visit to Australia on 18-23 August 1995 covering Sydney, Melbourne, Canberra, Brisbane and Darwin. During this visit, then President Ramos witnessed the signing of six (6) government and twenty-six (26) business agreements which were expected to generate A$2.2 billion in trade and investment.

The 1995 Memorandum of Understanding on Cooperative Defence Activities signed by the then Secretary of Foreign Affairs Hon. Domingo Siazon and Australian Minister for Defence Hon Robert Ray continues to be the framework for bilateral defence cooperation.

Security cooperation between the two countries would also be supported by the MOU for Joint Action to Combat Child Sexual Abuse and Other Serious Crime signed in October 1997 in Manila, the first of its kind in Australia and a landmark in government action against child sexual abuse.

In 1999, Australia granted market access to fresh mangoes from Guimaras Island subject to the application of phytosanitary requirements.

There were several high-level visits between the two countries including those of then Australian Prime Minister John Howard for the APEC Summit (1996), Australian Deputy Prime Minister Tim Fischer (1996 and 1998), then Minister for Defence Ian McLachlan (1996), then Vice President Joseph Estrada (1996), former President Fidel V. Ramos (1998), then Secretary of Foreign Affairs Domingo Siazon (1997 and 1998), and then Australian Foreign Minister Alexander Downer (1997).

Ambassador Domingo Albert initiated the awarding of the Philippine Liberation Medal (PLM) to Australian Servicemen who served in Leyte Gulf Landing, Surigao Straits and Lingayen Gulf Landing which ended World War II. The granting of this medal to Australian veterans was approved by then President Ramos on the occasion of the 50th Anniversary of the Battle of Leyte Gulf in 1994.

From 1995 to 2001, she personally awarded 3,900 Australian servicemen in all States and Territories from a total of 5,000 qualified veterans. Among them was former Prime Minister Gough Whitlam who served as a Flight Lieutenant with the Royal Australian Air Force. Former Secretary of Foreign Affairs Raul Manglapus, himself a war veteran, witnessed the conferment. To this day, the awarding of PLM to Australian veterans continues under the auspices of the Office of the Defense and Armed Forces Attaché based in Canberra.

As a woman Ambassador, she placed a strong focus on promoting the interests and welfare of Filipino women. Under her cultural and public diplomacy program, the Philippines contributed to the celebration of Australia’s centenary in 2001 through Filipina Fusions, a cultural festival featuring Filipino women artists and writers. She also initiated the Filipino Australian Women Achievement Awards first launched in Queensland in 2000 to uplift the image of Filipino women in Australia.

Ambassador Domingo Albert was the first woman Dean of the diplomatic corps in Canberra in 2001 during the Centenary of the Federation of Australia. She also chaired the ASEAN Committee in Canberra in the same year.

Ambassador Domingo Albert attended the University of the Philippines as well as academic institutions in Europe, namely: the Institute for International Studies in Geneva, Switzerland; the Diplomatic Institute in Salzburg, Austria; Boston University Overseas in Bonn, Germany; the Institute of Political Science and Strategic Studies in Kiel, Germany; and, the J.F. Kennedy School of Government at Harvard University.

In recognition of her efforts in promoting Philippine relations with Germany as well as relations between ASEAN and the European Union, she was awarded the Knights Commanders Cross of the Order of Merit with Star of the Federal Republic of Germany in 1992. In 1994, she was awarded the Order of Sikatuna, with the rank of Datu, for her exceptional and meritorious services to the Republic of the Philippines.

She speaks English, German, French, Romanian, Spanish and Japanese in addition to her national language, Filipino.

She is a member of the advisory board of the Institute for Cultural Diplomacy in Berlin, the Asian Institute of Management, the Global Summit of Women, the Business and Professional Women Philippines and other women’s groups.

She is currently Senior Adviser to SGV and CO/ Ernst and Young Philippines. She is married to Hans Albert (deceased) and is a mother to Joy and Arne Jerochewski and grandmother to Oskar.