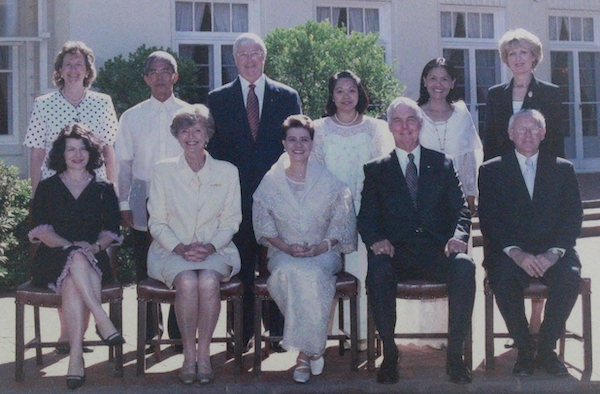 Ambassador Cristina G. Ortega served as the Philippine Ambassador to Australia and non-resident Ambassador to Vanuatu, Nauru and Tuvalu from January 2004 to June 2006.

While Australia was her first ambassadorial post, Ambassador Ortega's diplomatic career already spanned close to thirty years then. Her first government organization, the Department of Trade and Industry (DTI), assigned her as Commercial Analyst at the age of 23, then Commercial Attaché at the Philippine Embassy in Paris, France from July 1972- July 1978. She would then serve in Los Angeles (1978-1984), Paris (1984-1986) and Brussels (1988-1991).

Her economic expertise, trade promotion skills, language proficiency in French as well as her academic qualifications enabled her to top the Foreign Service Officers Examination in 1982. She joined the Department of Foreign Affairs, with a mid-level rank, in 1991.

Ambassador Ortega served in various capacities at the Department of Foreign Affairs and at Philippine posts abroad. She set up the European Community Division of the Office of European Affairs and became the first Director from 1991-1993. She headed the Economic Diplomacy Unit (EDU) of the Department while serving as Special Assistant to the Secretary of Foreign Affairs from 1993-1994. She served as Chief of Staff of the APEC Substantive Group at the APEC SOM and Chief Coordinator of APEC Special Projects during the Philippine hosting of APEC in 1996. She was the Executive Director and then Assistant Secretary for the Office of American Affairs (2001-2003) and Assistant Secretary for Asian and Pacific Affairs (2010 to 2011).

Her overseas assignments included New York (1994-1997), Beijing (1997-1999) and Los Angeles (1999 to 2001). After her assignment in Australia, Ambassador Ortega was transferred to Brussels as Ambassador to the Kingdom of Belgium, with concurrent accreditation as Ambassador to the Grand Duchy of Luxembourg and Head of Mission to the European Union in June 2006 until January 2010.

Her last foreign service post was in Paris, France as Ambassador to the French Republic, non-Resident Ambassador to the Principality of Monaco and concurrent Ambassador and Permanent Delegate to UNESCO from September 2011 to January 2014. She retired from the Department of Foreign Affairs and from Government Service on 1 February 2014.

In was during her tenure as Philippine Ambassador to Australia when the inaugural Philippines-Australia Ministerial Meeting was convened in Sydney on 12 August 2005 by Philippine Foreign Affairs Secretary Alberto G. Romulo, Trade and Industry Secretary Peter Favila, Australian Foreign Minister Alexander Downer and Deputy Prime Minister and Trade Minister Mark Vaile. This dialogue has become a permanent high-level dialogue mechanism between the two countries held bi-annually.

She oversaw the signing of the MOU on the Deployment of Air Security Officers (2006), MOU on Border and Migration Cooperation (2005) and MOU between the Philippine Council of Young Political Leaders and the Australian Political Exchange Council (2005).

In her first year as Ambassador to Australia, she was able to complete visits to all States and Territories where she met with State and Territory Government officials, the Filipino communities, and business organizations with a particular focus on promoting the export of Philippine products and services. In her second year, she was able to present her credentials to all three Pacific Island Countries she was concurrently accredited to.

She was known as the Ambassador of bananas, mangoes and pineapples among Australian officials and foreign diplomats because of her strong representations with the Australian Government to open their markets to Philippine agricultural exports.

She sought technical assistance on food standards to help Philippine food exporters to comply with Australian standards. These efforts bore fruit in 2005 when the first shipment of 8,000 kg. of fresh Philippine pineapples landed in Brisbane. She secured the release of AUD 250,000 for a mango survey that would expand the source of Philippine mangoes outside Guimaras Island, and obtained an Australian commitment to import for the first time at least 18 metric tons of banana puree.

She started and led the negotiations for a military/police cooperation agreement between Australia and the Philippines, which was later signed by the Defense Ministers of both countries and allowed police and military men to exchange information on terrorism and counter terrorism, obtain scholarships, and undertake military exercises together.

She served as the Chair of the ASEAN Committee in Canberra on January to June 2005 where she initiated an Inter-faith Prayer Service for the Asian tsunami victims.

Under her cultural diplomacy program, Ambassador Ortega initiated the first ever Pasko sa Canberra in 2004, a Filipino Christmas Festival now held annually in December which celebrates Filipino heritage and culture in Australia. It was during the inaugural Pasko sa Canberra where the importation of Philippine pineapples to Australia was officially launched with Mrs. Marlena Jeffery, spouse of the Australian Governor-General as the guest of honor.

During her tenure, Ambassador Ortega mounted a trade, cultural and tourism exhibition at the Australian National Museum (2004), held a glass sculpture exhibit of Ms. Impy Pilapil and a concert by the University of Visayas choir at the Australian High Court (2005), and supported book launches by Filipino Australian authors Dr. Merlinda Bobis and Dr. Dante Juanta (2005).

She is a recipient of several awards, decorations and citations, including the following: