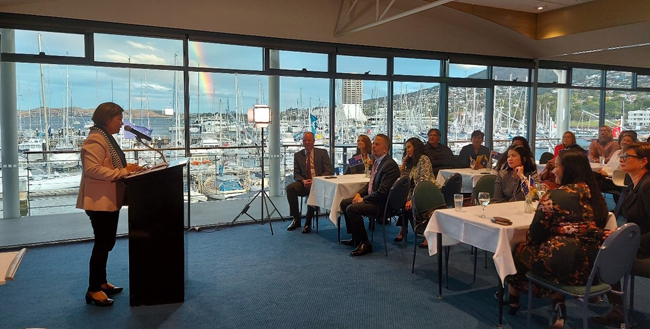 H.E. Ma. Hellen B. De La Vega, Ambassador of the Philippines to Australia, delivers her message during the 75th Anniversary Reception for the Filipino community in Tasmania on 03 March 2021 at the Royal Yacht Club.

08 March 2021 (Canberra) - H.E. Ma. Hellen B. De La Vega, Ambassador of the Philippines to Australia, hosted a reception for the Filipino community in Tasmania on 03 March 2021 at the Royal Yacht Club of Tasmania in celebration of the 75th Anniversary of the Establishment of Diplomatic Relations between the Philippines and Australia. More than 30 people attended the event representing Filipino community organizations Filipino student community, the Australian Government and the University of Tasmania.

In her message, Ambassador De La Vega said, “We listened very intently to you and know that you all have many inspiring stories to share on your experience as Filipinos in Tasmania which form such an important part of the enduring friendship between the Philippines and Australia. Filipinos in Australia after all, are the fifth largest migrant community in Australia who have long contributed to Australia’s vibrant multicultural society even before the formal establishment of diplomatic relations. In all my engagements with the Australian Government, Australian leaders have never failed to mention their admiration of the work ethic, strong faith, hospitality and generosity of Filipinos in this country.”

Dr. Timothy Ault, Director of the Department of Foreign Affairs and Trade – Tasmania, welcomed the first official visit of Ambassador De La Vega to Tasmania and expressed enthusiasm in participating in the celebration of the 75th Anniversary. He said the values of mateship and bayanihan bring together our two countries and has nurtured this historic bilateral relationship.

As part of this year’s celebration, the Philippine Embassy in Canberra, the Department of Tourism Sydney and the Philippine Consulate in Hobart will be producing a special 75th Anniversary video featuring the Filipino community in Tasmania with the theme #IamFilAussie to be shown in the official website of the Philippine Embassy (www.philembassy.org.au) and Facebook Page (@PHinAustralia).

The Philippine Embassy in Canberra expresses its appreciation to the Filipinos in Tasmania for the warm welcome and looks forward to your support in deepening engagement between the Philippines and Australia. END