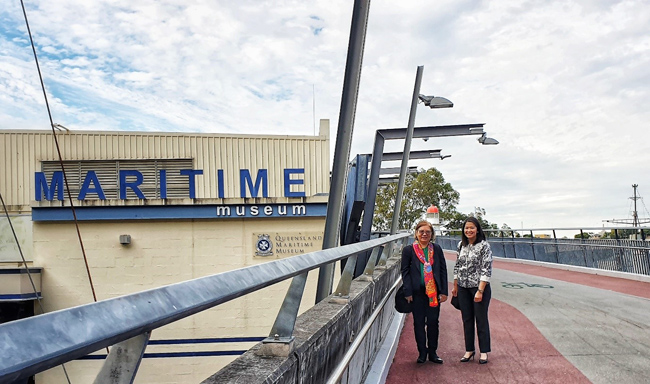 Philippine Ambassador Ma. Hellen B. De La Vega and First Secretary Corina Reyes in front of the Maritime Museum of Queensland on 02 June 2021 in Brisbane City.

During the Official Visit to Queensland of H.E. Ma. Hellen B. De La Vega, Ambassador of the Philippines to Australia, the Ambassador highlighted the historic maritime ties between the Philippines and Australia as the two countries celebrate 75 years of diplomatic relations.

The Ambassador said, “Queensland has always figured prominently in the friendship between our two peoples. Queensland, particularly Torres Strait Islands, was a host to some of the earliest settlements of Filipino pearl divers, known as the Manilamen, in the late 19th century. This would be the start of our people-to-people linkages which has phenomenally grown in the last 75 years. Today, there are more than 300,000 Filipinos who make up the fifth largest migrant community in Australia.”

Among the Manilamen was Heriberto Zarcal, who is considered one of the earliest Filipino investors in Australia. He arrived in Thursday Island in the 1890’s and later on operated a large business with as much as twenty boats in areas as far as Brisbane and Darwin. The Philippines Australia maritime cooperation has evolved towards higher education and research cooperation on maritime studies, Australian investment in the Philippines shipbuilding industry and a shared advocacy for the rule of law that governs our oceans.

In her visit to the University of Queensland, the Ambassador met Professor Peter J Mumby who heads the Marine Spatial Ecology Lab (MSEL). MSEL has been engaged in research collaborations with several countries on reef ecosystems including with the Philippines on the Coral Triangle Initiative.

The Philippines will be celebrating Maritime and Archipelagic Nation Awareness Month (MANA Mo) in September 2021 to raise awareness and consciousness on maritime and archipelagic issues and concerns. Watch this page and official website of the Department of Foreign Affairs (www.dfa.gov.ph) for updates. END