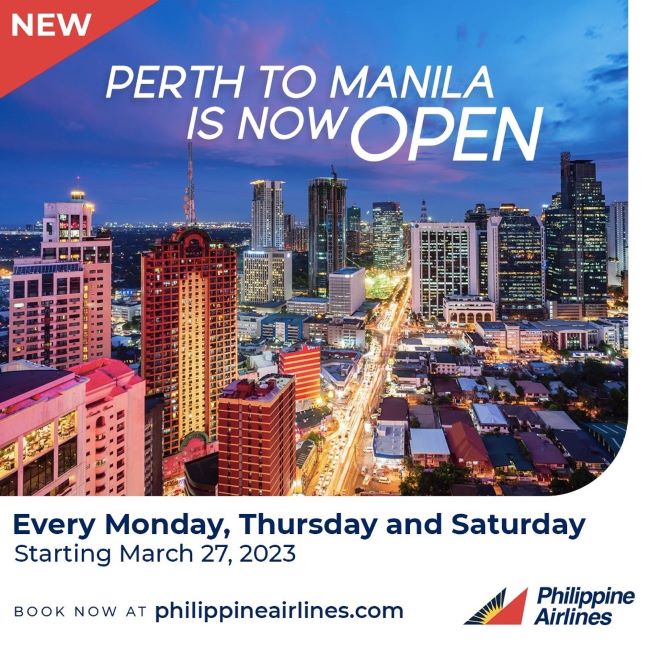 9 December 2022, CANBERRA, Australia– Philippine Ambassador to Australia Ma. Hellen B. De La Vega welcomed the announcement of Philippine Airlines (PAL) on the start of regular Perth-Manila and Manila-Perth flights in March 2023. This will be the first ever nonstop air link between the Philippines and Western Australia.

PAL will operate three times a week on Monday, Thursday and Saturday starting 27 March 2023. The Ambassador said, “I wish to congratulate Philippine Airlines and Perth Airport on the launch of the nonstop flight between Manila and Perth. The Philippines has a strong relationship with the State of Western Australia given our trade, investment and people to people connections. I look forward to more opportunities to reinforce this relationship with the help of Philippine Airlines.”

There are at least 46,000 Filipinos in the State of Western Australia and the direct flight will help facilitate further travel and exchanges between the Philippines and the west coast of Australia.

The Ambassador congratulated PAL and Perth Airport on this partnership. PAL is operating nonstop flights between Manila and Sydney, Melbourne and Brisbane and with the opening of the Perth route, PAL now offers a total of twenty (20) weekly nonstop flights to four Australian destinations. -- END