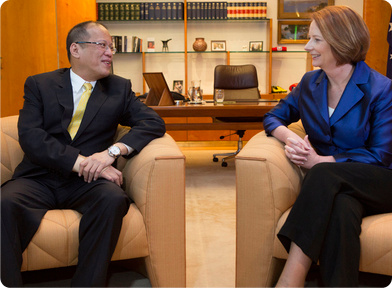 Australian Prime Minister Julia Gillard met with Philippine President Benigno S. Aquino III on 24 October 2012 as part of his State Visit to Australia. Their meeting was followed by discussions between Australian Ministers and Philippine Cabinet Secretaries.

Since establishing diplomatic relations in 1946, Australia and the Philippines have been enjoying a warm and wide-ranging relationship based on shared democratic values and interests, with important and growing people-to-people links. The two countries also have a shared desire for regional prosperity, development and security.

Prime Minister Gillard congratulated President Aquino on the signing on 15 October 2012 of a Framework Agreement on the Bangsamoro with the Moro Islamic Liberation Front, an insurgency movement in Southern Philippines that entered into negotiations with the government in the late 90s. Both Leaders hoped the Agreement would provide a basis for genuine, lasting peace in Mindanao. They agreed that it would now be important for the Agreement to be fully implemented, resulting in significant improvements to the security and prosperity of communities across the southern Philippines.

The Leaders agreed the economic relationship between Australia and the Philippines holds great promise, building on the strong foundation provided by the Agreement Establishing the ASEAN-Australia-New Zealand Free Trade Area. Both Leaders also shared the objective of increasing two-way trade and investment flows and agreed on the importance of a stable and predictable regulatory environment. Prime Minister Gillard acknowledged President Aquino’s reform agenda to promote good governance, transparency and accountability in government. The Leaders agreed to continue to work in regional and multilateral forums to advance regional economic integration and resist trade protectionism.

Prime Minister Gillard announced a recent agreement to extend Australian market access for Philippine mangoes. This will be welcomed equally by Australian consumers and mango growers in the Philippines.

The Leaders welcomed the recent entry into force of the Status of Visiting Forces Agreement between Australia and the Philippines.

The two Leaders underlined the importance of a successful East Asia Leaders’ Summit in November 2012, including discussion of political and security issues. Both Leaders noted that the Philippines is the country coordinator for ASEAN-Australia dialogue for the next three years.

In relation to the South China Sea, Prime Minister Gillard noted that Australia did not take a position on competing territorial claims, but called on claimant governments to clarify and pursue their territorial claims in accordance with international law, including the UN Convention on the Law of the Sea. President Aquino stressed that peace and stability in the region is a concern of all states and that central to this is a rules-based approach in addressing issues in accordance with international law. Both Leaders recognised the need for governments to exercise restraint and refrain from actions that could further increase tensions. The two Leaders encouraged ASEAN countries and China to conclude a regional Code of Conduct in the South China Sea at an early date.

Prime Minister Gillard and President Aquino announced a development program to contribute to building peace and stability in Mindanao, by improving access to education. BEAM-ARMM (Basic Education Assistance to Mindanao – Autonomous Region of Muslim Mindanao), will support the most disadvantaged conflict-affected communities. The program will introduce community-based education in remote communities, integrate health and hygiene programs in schools, develop technical and vocational training for out-of-school youth, and increase access to quality early childhood and basic education.

Prime Minister Gillard and President Aquino also witnessed the signing of a new Air Services Agreement between Australia and the Philippines which will help lay the groundwork for increased trade and people to people links.

Prime Minister Gillard and President Aquino expressed satisfaction that the two countries’ strong government to government relations were underpinned by close and growing people-to-people ties. The Leaders noted that Filipinos are one of the fastest growing immigrant communities in Australia, with some 225,000 currently living in Australia, making an important contribution to the Australian economy and society. In addition, some 6000 Filipino students are currently enrolled across all sectors of the Australian education system.

The two Leaders welcomed their deepening and broadening partnership that would further enhance already strong bilateral, regional and multilateral cooperation on shared strategic interests. They welcomed the inaugural bilateral Strategic Dialogue held in October 2012 and agreed to consider ways to further deepen and broaden the political, security, economic, and people-to-people relationship.

Finally, the two Leaders welcomed recent high-level bilateral engagements and visits, including the visit to the Philippines by Australia’s Governor-General Quentin Bryce AC CVO, and the visits to Australia by a number of Philippine Cabinet Secretaries.